What is a minute of angle? 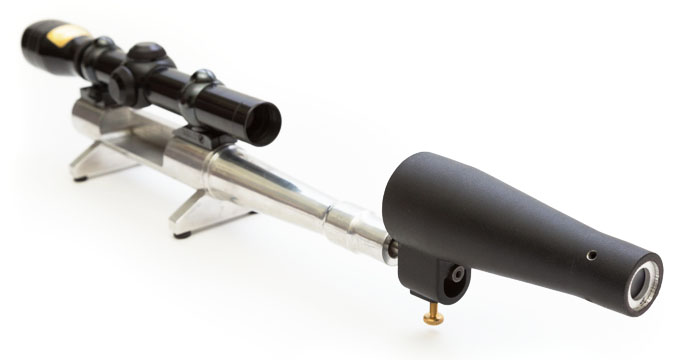 Just exactly what is, "a minute of angle"? That sears to be a question familiar to us all and one that comes up quite often. It is just one of those things that "old timers" take for granted until someone comes along with the temerity to ask!

In outdoor ranges, 95% of all shooting is done at 100 yards. The other 5% is made up of those who shoot at 200 yards and a very small percentage of people regularly shoot at ranges more distant. The availability of ranges of course has a lot to do with this.

On the range or on paper, measure off an accurate 100-yards from the muzzle. If you had an instrument capable of describing a divergence from parallel of one minute of angle, the two points of these lines at 100 yards distance would be 1.047" apart. To simplify matters, we call "one inch" at 100 yards, "one minute of angle". Close enough for the purpose of shooting on a range or in the field.

What does it take to describe such an arc ? Simply put, if one were to "shim" a straight edged object under one end, raising that end to a height of .00029" (twenty nine, one hundred thousandths of an inch) a minute of angle from the base (table) would be achieved in that 1" long object. To put it in more simplified terms, that .00029" figure is about fourteen times thinner than a piece of paper. In dealing with the production of the SITE-A-LINE, we have to deal with figures that are a fraction of these "tolerances".

The scope mount manufacturer generally takes care of much of this for the gunsmith mounting a scope, as a correction is built right into the mount base. The manufacturer makes the rear base about .005" to .008" higher to compensate for bullet drop so as to not end up with the scope reticle too far off mechanical center. This was especially true in dealing with scopes prior to the more modern system of "self-centering" reticles. Regardless of the transition, one should indeed take advantage of the "optical" center of the glass for optimum efficiency.

Ok, but what about iron sights? If .00029° in an inch of length equals one minute of angle won't that change in dealing with sights that are different distances apart? You bet! In shooting, we deal in minutes of angle in making sight corrections in both elevation and windage. For some never understood reason, the measurement between sights is called, "Sight Radius". With my three Model-70 Winchester match rifles, the radius measures 32, 33 & 33.5 inches. For each revolution of the 40-pitch threaded elevation spindle, the sight changes 1/40th of an inch or, .025" (...twenty five thousandths of an inch). With most match rear sights, such a movement equals three minutes of mechanical change. One minute therefore would  mechanical movement of .00833", or roughly 8/1000ths of an inch. With a 33" sight radius, such a mechanical movement would result in a change of impact of the center of the group of 1.091 at that yardage. Thinking in the terms of one inch is plenty close enough.

The use of a SITE-A-LINE is an extremely accurate means to establish a base from which to work. Without such a base, whatever movement is done on either iron or scope sights is a movement away from an unknown point - doubtless, a questionable step at best. In the interest of accurate shooting one must work from an accurate base. The Site-A-Line, a highly refined optical collimator, establishes that very important and accurate base.