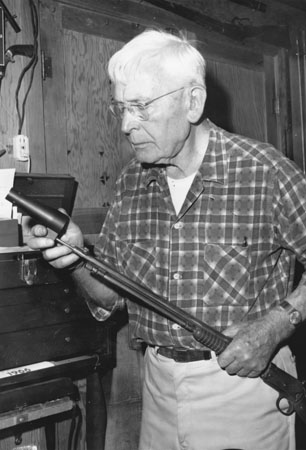 Inventor, technician and designer. "Jack* as he was known to his friends was well known in many endeavors.  In today's shooting world he was known as the inventor of the Sweany Site-A-Line. This tool, in a yery short period of years completely revolutionized the aligning of sights and increased the dependability of small arms.

Everything from bullet dies to triggers to stereoscopic photography was extensively explored, designed and recorded by Jack and many of his designs are currently used by other firms. During World War II, Jack worked in the optical shop at Mare Island Naval shipyard in Vallejo, California. He was aware of a very real problem evident with paralleling the tubes of naval gun mounts, in particular the 5-inch-38, an all-puipose aircraft and sea battle cannon that was commonly found in twin mount configuration.

No mechanical means of aligning such barrels had previously been successful. Adopting his small arms bore-sight collimator to the job solved the problem for the U.S. Navy. Firing tests at sea proved such optically paralleled barrels to be within very close tollerances. The group center of the collimated barrels proved to be less than ten feet apart at 3,700 yards! The U.S. Navy was convinced as to this superior method utilizing optical collimation and thereafter all naval ships steamed to Mare Island for this periodic work. Jack's idea paid off handsomly, helping to assure our millitary success in World War II.

The Site-a-Line you purchase today uses the same tried and true optical technology to calibrate your small arms.